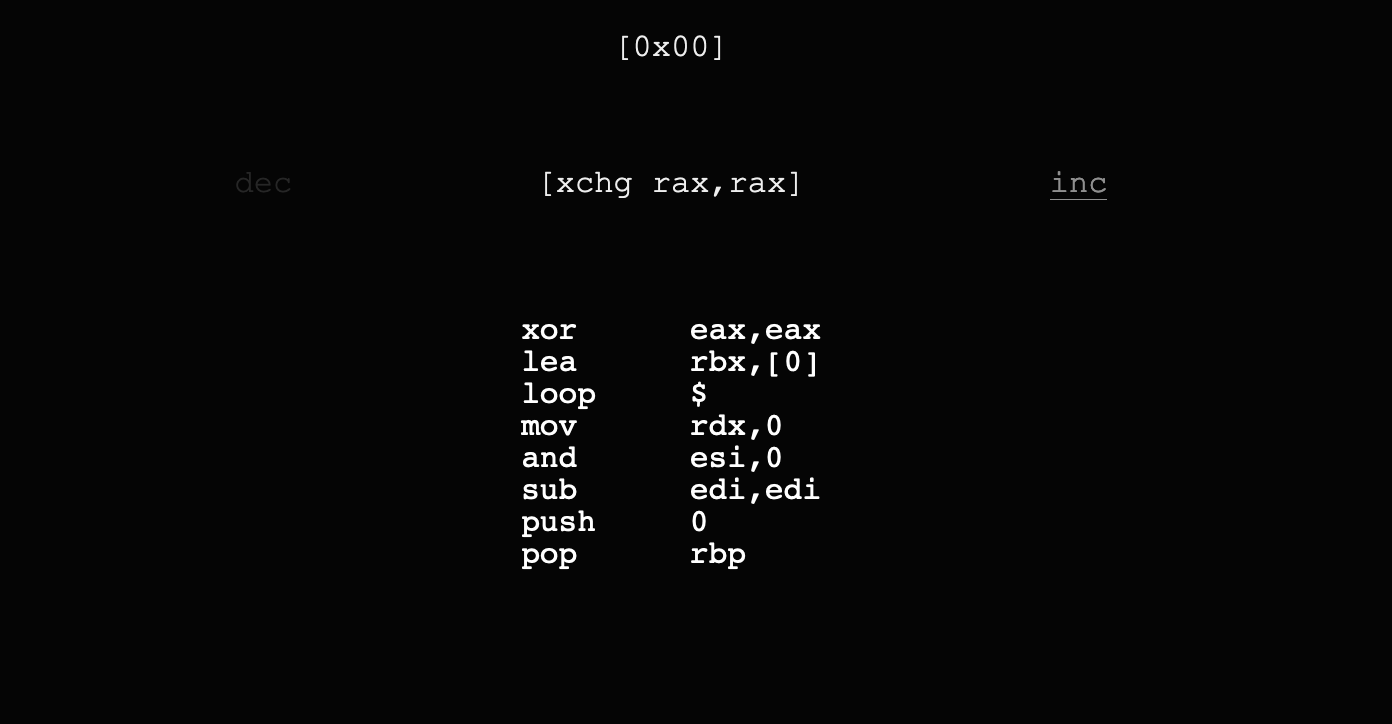 Assembly code can appear mysterious to the uninitiated. Aspects of the physical machine abstracted away in higher-level languages are referred to directly in its terse commands.

This chapbook of minimal assembly code poems (its author refers to them as "snippets") offers no solutions, context, or explanations to ease this gap, leaving the work of deciphering to the reader. For xorpd, its pseudonymous author, this is exactly the point: to immerse the reader in the machine level of code.

When working inside a computer, everything is eventually made of assembly, so this is where you go if you really want to understand how things work.

There is no extraneous word of text in the book to break that context. The title, xchg rax, rax, is a NOP instruction (pronounced no-op, for no operation): xchg exchanges the data of two operands, in this case of rax with itself. The author's name, xorpd, is a bitwise logical XOR (exclusive or) of packed double-precision floating-point values.

The xor logical operation is one of my favorites. It is the foundation for most of our modern cryptography.

The "xorpd" instruction allows xoring 128 bits at a time. It is really the kind of instruction you want to be when you grow up.

The full book can be found here but is also available as a lovely printed book.

Another friend recommended adding QR codes to the pages, linking to explanations, but I wasn't willing to do this either. I remember trying to decipher each of those code snippets myself, and I felt that I could not let my readers down by handing them an easy solution. 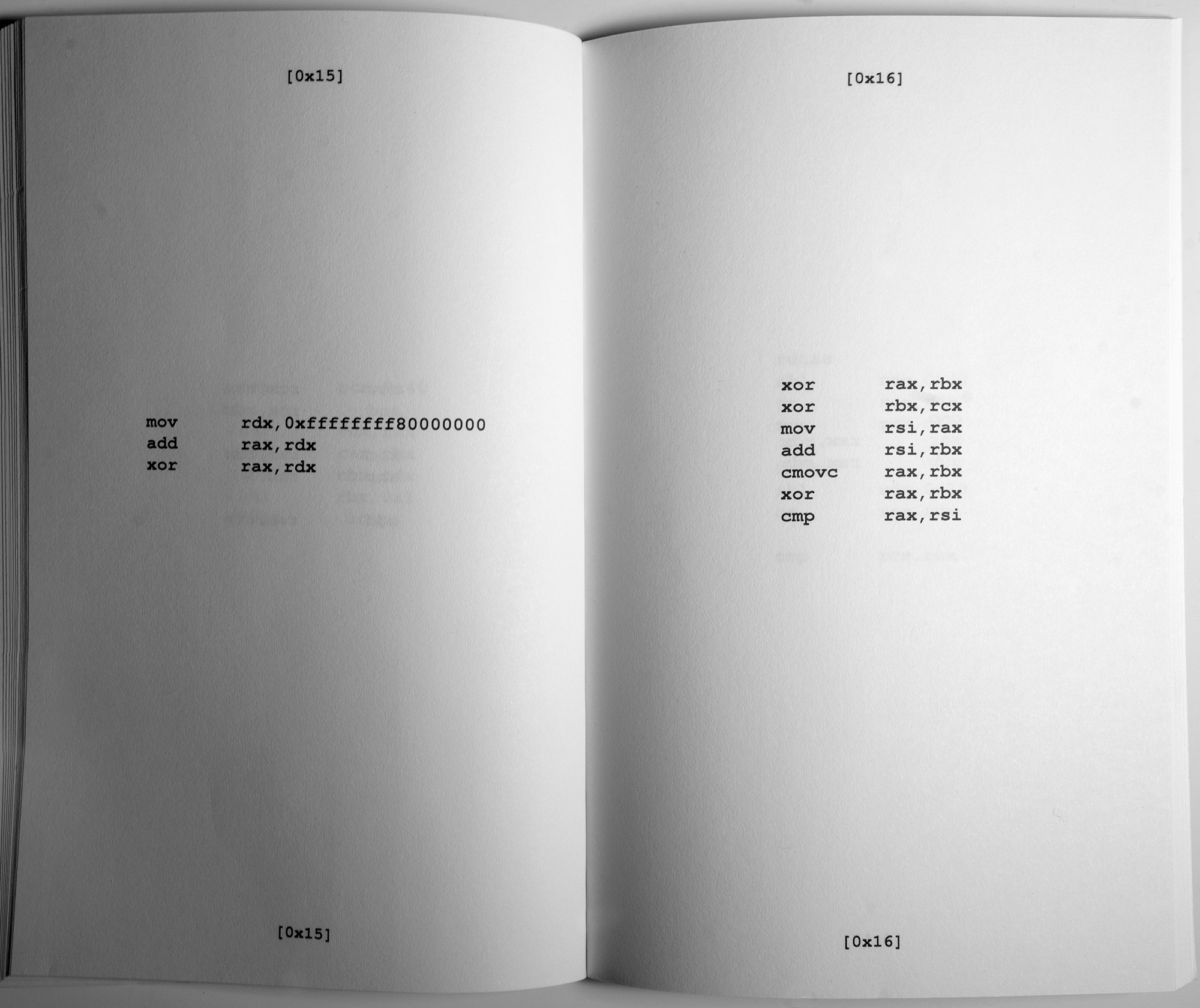 That lack of explanation, along with the monospaced font, gives the book the feel of conceptual poetry, perhaps an early Vito Acconci piece.

My father opened one of the books and looked at it in amazement. He said something like "There is nothing inside the book, it's all strange short English words, who would want to buy something like this?"

However, much of the joy of the book comes from discovering the nuances of these tiny programs; many rely on assembly-specific tricks that do not really translate "up" into the virtual machines defined by higher-level programming languages.

Those who have trouble deciphering can view xorpd's video series Assembly Language Adventures, which teaches assembly programming beginning with the very basics, reaching a level of expertise through 29 hours of instruction. Xorpd created the book as a companion piece while working on the video, pulling his favorite assembly snippets together.

One of my favorites is:

This snippet converts a nibble (4 bits) into a hex digit with only three instructions. It always takes me a few mintues to understand how it works. From what I know the das​ instruction doesn't work anymore on the x86_64 architecture, but it is a nice reminder of what life used to be.

How is this accomplished in three assembly instructions? Where is the conversion happening, and how is the 0x0a value used? The author has provided a complete explanation of the code below.

This is the relevant part of the ASCII table:

There is an unfortunate gap between the numeric digits and the caps English
letters. The code above is meant to overcome that gap.

Most of the magic of this snippet comes from the `das` instruction, so we
better start by exploring what it does.

`das` means decimal adjust (al) after subtraction. Together with the rest of
the binary coded decimals instructions family, it allows us to perform binary
coded decimals arithemtic.

And finally, an example equivalent to the first subtraction example:

Which will also result in al = 0x23. This time we add instead of subtract.
and we use the instruction `daa`, decimal adjust after addition, instead of
`das`.

There is one more delicate point about `das` and `daa` that we will need for
our solution. Take a look at this example:

We want to use the 16 - 10 difference to our advantage, somehow bridging the
gap between the '9' and 'A' characters.

Here is a first attempt that is close to what we want to achieve:

But we could make our code shorter if we could somehow avoid using `cmc`.
In order to do this, we could turn to the dual side, knowing that given
wraparound, subtraction is equivalent to addition. In other words,
`add al, 0x30 // daa` is equivalent to `sub al, 0x70 // das`.

Combining this with the carry flag trick, we finally get:

This gives an idea of how much is packed into these short programs, but don't count on explanations for the other pieces. While the code may have seemed daunting early on, it has been intriguing enough for the book to build an audience slowly over the years.

When "xchg rax, rax" was released in 2014, there was no real interest in the book. I hate marketing work, so I never really did anything to attempt to market the book. It is only recently, 6 years later, that people started paying attention.