Joe Moore’s Meaning in Mistakes is a collection of ambiguously misspelled words: each has two sets of adjacent letters that can be swapped to form correctly spelled (US) English words. The word “saets,” for instance, could resolve to “sates” a desire or “seats” someone at the table.

Beginning as a list posted to his website, later iterations of this project present the list acid-etched in a mirror, or a television set with the single example infiedls etched into its screen. Version 3, however, presents the work to an unsuspecting audience: a wifi router, which has lived in various parts of the city, serves the words to anyone who connects to it, regardless of what site they try to access.

An excerpt from version 3

>> When someone connects to your wifi network, does any url resolve to your list of ambiguous words, or how do they find the site?

Version 3 of “Meaning in Mistakes” runs off of a cheap travel wifi router with openwrt (a variant of linux) loaded as the operating system and an antenna soldered to the board to extend the reach of its radio. I set the router up as a captive portal running a webserver, dns, etc. When someone connects to the network, it’s self contained, any URL they try to connect to is going to resolve back to an HTML document on the device that contains “Meaning in Mistakes.” Additionally, the name of the wifi network changes every 10 minutes to one of the 88 sets, which sets up another potential for context to effect the text. Looking at available networks a user would see a set from the work along with other networks names in their vicinity. People connect either purposefully (they are looking for open wifi) or they may just have their phone set to connect to any open wifi network. This creates yet another context, attempting to visit Amazon.com and seeing the list in its place could create some interesting associations for the viewer.

>> Where have you had it set up in the city?

From around 2013-2016 version 3 ran from my apartment window in Bushwick, Brooklyn. I can also power it with a small cell phone battery, so I would throw it into a bag and take it around New York with me on public transit. It has also lived in my office at The City College of New York, where I teach. It’s a kind of situated net art, only available within the device’s limited wifi range. This joins place to the reading of the work, unlike most net art which can be seen from anywhere with a connection to the internet. Each situation alters and extends the activity of perception. For me perception is not an apolitical activity or a passive position, but an activity culturally constituted and directed. 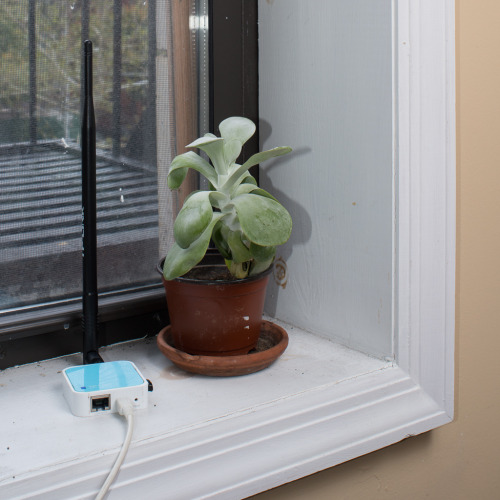 The “Meaning in Mistakes” router (version 3)

>> How did you draw up the list of words?

A few years back the artist Heather Dewey-Hagborg sent me an abstract from an academic paper on an experiment with word recognition and reading speed. As I remember it the experiment described was this, take a paragraph and randomly sort every letter in every word with the exception of the first and last letter of each word. The researchers found that there was very little speed difference between those reading the sorted and unsorted versions of the paragraph, meaning that we read by looking at shape rather than individual characters. The nice thing about this abstract was that someone performed the described manipulation to it, so all the “inner” letters of every word had been randomly sorted. I thought about the study and how the surrounding words help reduce ambiguity since surely there were words in the paragraph that could be “corrected” multiple ways if taken out of context. This led me to write a program to find character sets that could become more than one word from a very large word list with a single character transposition. Another rule is that the potential words also had to share the same first and last letter.

>> Are you adding to it regularly?

In one sense I don’t add to it, but the materials, distribution, etc, change in some way with each version, so in another way I do. I’ve also created versions of the work where only a selection of the initial 88 are used. For example version 2 is a selection of 10 from the first list, each acid etched into a mirror. There’s a philosophical aspect to your question, concerning what constitutes a new or different work, and that is one of the reasons I often work in series and use appropriation and translation between materials as part of my process. Questions around copies and originals or similarity and difference aren’t new, but remain interesting and compelling for me.

>> Tell me a bit about who you look at

William Burroughs and Brion Gysin are an early and important influence and one that’s easy to see in this  work. Artist/Poets associated with concrete poetry, language poetry, and early net.art. My practice also includes photography and video and so there’s quite a bit of image based work that’s important to me. Structuralist and experimental films by Michael Snow, Ernie Gehr, Hollis Frampton, Chantal Akerman, Paul Sharits, and Peter Kubelka to name a few. Video art by Steina and Woody Vasulka, Garry Hill, etc. Photography by Étienne-Jules Marey, Anna Atkins, Broomberg and Chanarin, Martha Rosler, Peter Piller, the list goes on. Some of this work I’ve been looking at for a long time and some of it doesn’t look much like the work I make. Reading and talking with people is an important part of my practice. Version 3 of the project wouldn’t have happened if Dan Phiffer didn’t create his wifi based project occupy.here and turn me on to working with cheap routers and openwrt. Things I’ve read recently include Mel Y. Chen’s book “Animacies,” Nichole Shukin’s “Animal Capital,” and Rob Nixon’s “Slow Violence.” Historians like Aby Warburg and Didi-Huberman have influenced a number of my works. Roma Publications puts out some amazing photographic/conceptual editions with numerous artists I’ve been looking at. Kelly Jazvac’s recent show using Plastiglomerates at Fierman Gallery in NYC was great. You can’t go wrong with Hans Holbein’s 1533 painting “The Ambassadors.”

More work from Joe Moore can be found on his website.