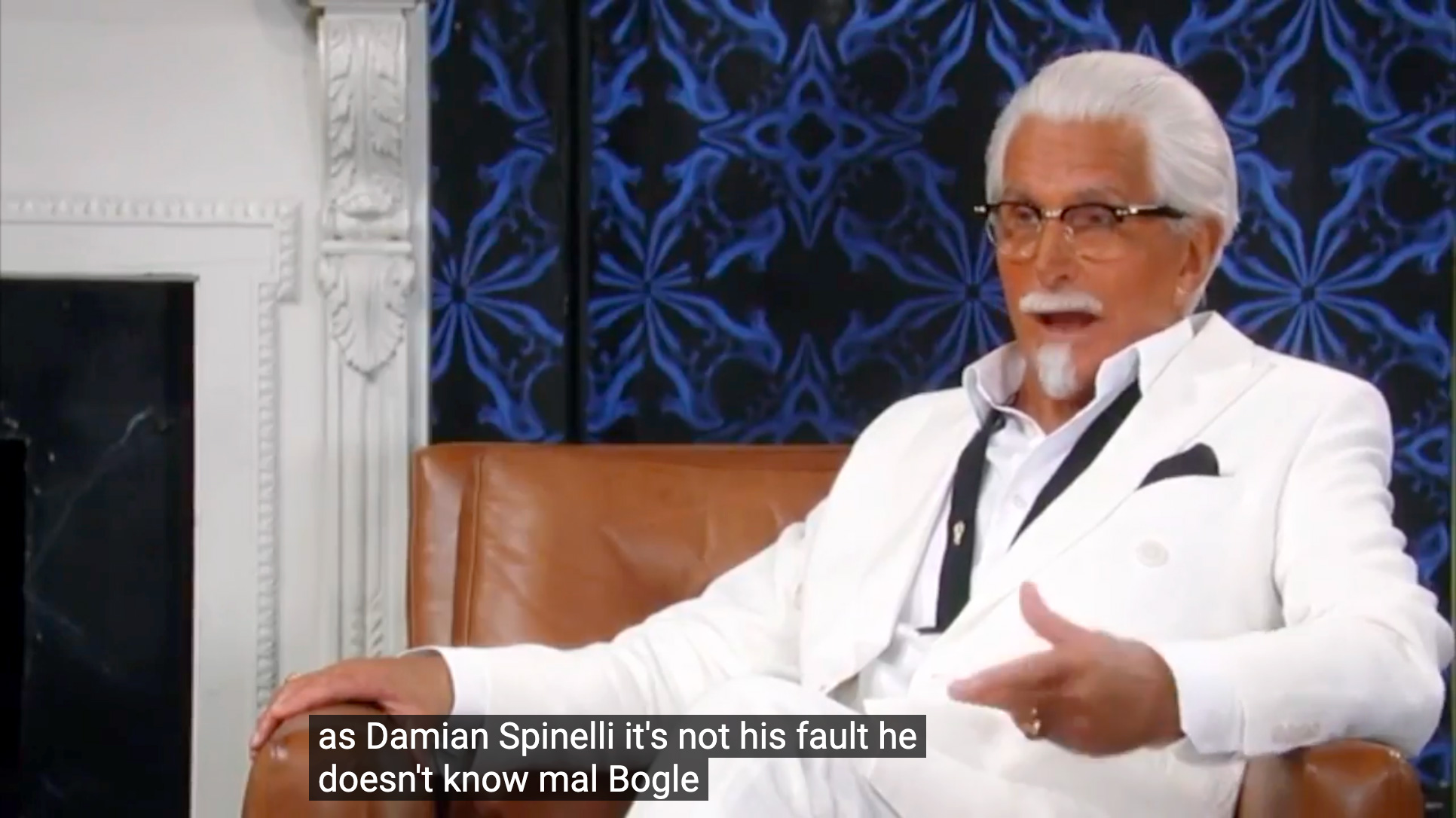 "It's not his fault he doesn't know mal Bogle" says Col. Sanders

"I was once cursed by a warlock," says Col. Harlan Sanders, in not even his most unhinged piece of dialogue on this General Hospital episode.

Sanders is visiting character Maxie Jones to request she secure his secret recipe (all 11 herbs and spices), which had been threatened by a bomb Sanders himself defused using the classic esolang Malbolge. Unfortunately, this all happens offscreen.

Damian Spinelli, mentioned by Sanders, is a private investigator / hacker who General Hospital's casting describes as a mix between Seth Green and Sean Penn's Spicoli. Spinelli is unable to defuse the bomb, not knowing Malbolge, but Sanders had picked up a little of the Turing Tarpit as one randomly does (apparently without learning how to pronounce it) and saves the (only copy of this?) recipe from being incinerated.

Sanders feels no reservations about then asking Jones to then hide this recipe which has attracted this violence, which she does without question.

The full scene is here in two parts:

For those who suspect this is created by a prankster, here it is tweeted by the show's account.

Why, once again, is the esolang Malbolge chosen for an absurd tv storyline?

It is almost certainly tied to Malbolge's explicit connection with encryption; Malbolge programs self-encrypt as they run and writing Malbolge programs is a matter of finding "weaknesses" in the system that can be exploited in order to write working programs. While brainfuck is by far the widest-known esolang among programmers, Malbolge occasionally, and quite randomly, appears in a wider cultural context, always in terms of leetness, encryption, and mystery. Most likely, the General Hospital writers picked it up watching Elementary, which included a Malbolge program left as a clue from a killer.

Malbolge is the focus of the "weird internet," most notably in the still-unexplained site c0d3.attorney. While c0d3.attorney does not offer any insight into Malbolge—the "programs" it lists don't work—it, like General Hospital, affirms Malbolge's status as the weird esolang. Ben Olmstead, Malbolge's creator, comments on the appearance:

If anything, I think it illustrates how random culture can be: a weird throwaway thing—made in an afternoon—gets referenced on popular TV shows, has academic papers written about it, and still gets mentions on Twitter, 20 something years later. Meanwhile, people put in years or decades of work to create things that just... disappear.

But that is how things work when your work of art or code helps inspire so much that comes after it.

Ben is an early esolanger, whose Malbolge, a language created in a single afternoon, is still considered the most challenging to code; he gives insight into the early days of esolangs. (Interview)