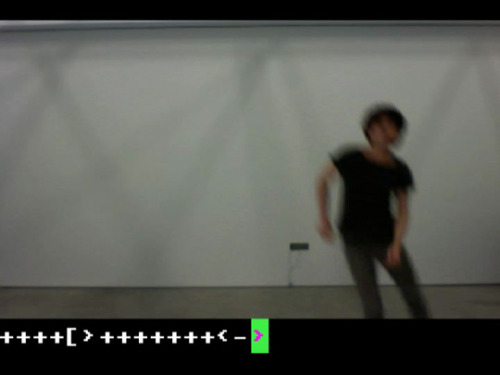 As Hanselmann puts it:

Bodyfuck is a vocabulary-based extension of brainfuck, like the many brainfuck clones, only here the vocabulary extends into the physical domain, thus drawing our attention to the act of programming itself. Constructing a bodyfuck program is like performing an incantation or OCD ritual: a series of specific gestures that must be enacted in correct order for the program to manifest. There’s no backspace yet (although there is a clear buffer if you mess up), so it must be performed flawlessly. Quoting from Cox / MacLean / Ward:

“Coding requires human intervention and full access to the means of production. In this formulation, the human subject gains agency (the power to act), as one who assembles the apparatus as much as is assembled by it."

The physical nature of the work makes the programmer’s labor obvious, particularly in the more demanding programs, where the same gesture often must be enacted many times in a row (yet precisely the right number). Hanselmann connects this to Bruce Nauman, who made explicit the labor of art, through the "conflation of artwork and art work.”

The bodyfuck performances are worth watching. Brainfuck itself is written in punctuation, the “extra” characters that are contentless on their own in most languages. Since we tend to read in words, rather than individual letters (even in code), the impression of brainfuck programs is of a congealed mass of these (seemingly contentless) symbols; strings of nonsense that actually have precise meanings. Bodyfuck forces us to consider each of these characters (these commands) individually – by constructing a narrative of the inscription of code itself.

Brainfuck Programming: How to write the number 36

How to think in brainfuck by constructing a single number

Vocabulary-based esolangs are sometimes overlooked. Here's a look at those who use intriguing lexicons to challenge conventional notions of computation